I am planning the installation of a B&G Broadband 3G radar, using a Zeus Touch 7 (T7) for display. I have now received the display that will also act as a chartplotter. So it was natural for me to check if I could use the T7 Sailsteer feature, by using my own data.

It happens that the T7 has an input for NMEA0183 data. My system produces a 10 Hz stream of binary data that I have to convert to NMEA sentences supported by the display. The conversion is done by a SAMD21 32-bit microprocessor, connected to the display through a MAX3232 converter. Note that the T7 has its own internal GPS, so that I don’t need to convert and send the GPS data from my system.

Here is the schematics and wiring used. Each NMEA sentence is sent once per second, through the NMEA 0183 Talker port (orange and green wires), using a baud rate of 38400. 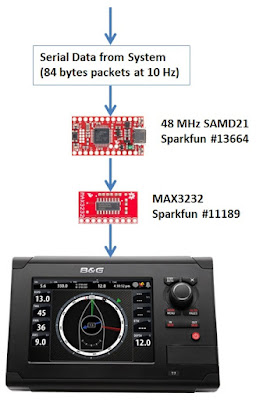 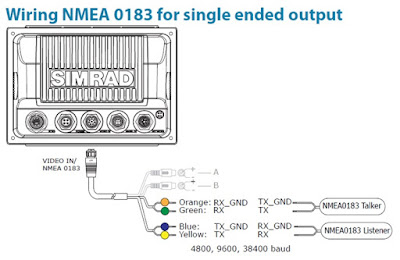 To test the behaviour of this setup, I used an example presented in an earlier post. I reproduce here the data from this example for convenience. 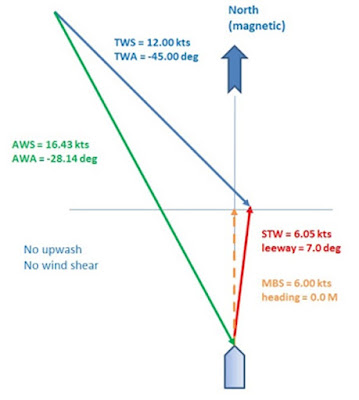 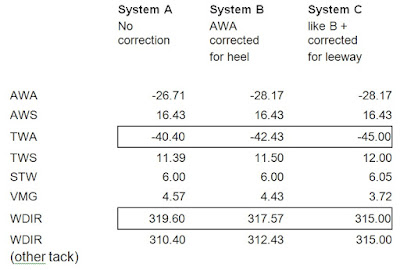 As a first test (System A of the example), I send continuously the 4 following inputs:

This corresponds to the basic inputs that the display would receive if it was directly connected to sensors (masthead unit, speed log and electronic compass). So the display is left calculating the following outputs: TWA, TWS, VMG and tide current. Here is a screen capture of the display for these conditions. 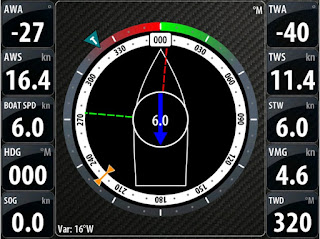 The calculated outputs of the display correspond exactly to those of the basic System A example. It is interesting to note that the display has correctly calculated a front current of 6 knots, as its GPS gives him a 0.0 knot SOG (the test is made at home, and the home does not move!).

Here again, the values calculated by the display agree with the results of the example for System B. 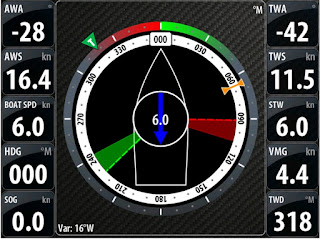 In the third test (System C, corrected for leeway), I send these additional inputs correctly calculated by my system (instead of letting the T7 make these calculations): 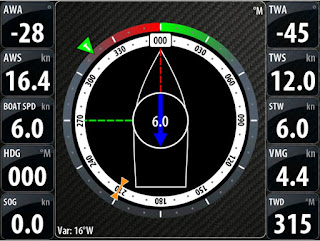 Here we see that the VMG value is not calculated correctly by the display. This is not surprising as the display has no information on the leeway. To do so and to reproduce all the correct data, this system would have to be completed by the B&G H5000 computer.

But despite this problem that may somewhat affect the resulting calculated laylines, I expect that the Sailsteer feature will still be very useful in practice, as it takes in account the tide current values in its calculations. This is a much more important correction in my sailing area characterized by strong tidal streams.

For now, the erroneous calculated VMG value will not be displayed on the T7, to avoid confusion with the correct value displayed on my tablet.