I have completed Phase 1 of my project, and I am very impressed by the performance of the MicroMag3 magnetometer. No hysteresis, spectacular real-time responsiveness: it looks like the motion-corrected part of the project (Phase 3) will not be necessary with this technology.
Here is the set-up used for these preliminary tests. The magnetometer on the breadboard is connected to a MAVRIC-IIB controller through the SPI bus, plus two other control lines as described in the datasheet. The microcontroller sends the calculated heading to a computer running Hyperterminal via a serial-to-USB converter. 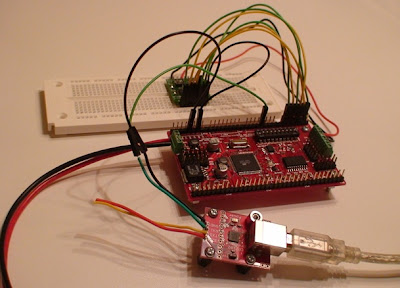 When measuring only 2 axes on the horizontal plane with a resolution better than 0.1 degree, a sampling rate of 14.25 Hz can be achieved. Higher sampling rates could be used at the expense of the resolution.
Here is the output produced when the breadboard is quickly snapped to a new angle every second or so.

The responsiveness is so sharp than you can even calculate the time taken during the quick rotation: it is around 3 time steps or 0.2 second. In a practical compass application, there is no need for a gyro: the rate of turn can be calculated directly from the magnetometer output.
Now some design considerations.
The objective is to get a resolution of 0.1 degree, with a 10 Hz update rate. In my location, the horizontal magnetic field is 17.7 microteslas (uT), which means that the resolution of the magnetometer should be 17.7 * 0.1 / 90.0 = 0.0197 uT. The MicroMag3 can achieve a resolution of 0.015 uT, but at the expense of an average sampling time of around 35 ms for each of the 3 axis. As it can measure only 1 axis at a time, this means a total sampling time of 105 ms, or 9.5 Hz at best. This does not leave time to add the accelerometer and tilt compensation calculations. To keep with the initial objective of 10 Hz, one would need 2 magnetometers working in parallel. In fact, I have decided to use 3 MicroMag3 in parallel for the final design, to insure that the measurements of each of the 3 axis of the moving compass will start exactly at the same time. It’s definitely not an economical or an elegant solution, but sometimes you have to use some brute force.
In this preliminary test, the Micromag3 was operated at 5 V, but it is optimized for an operation at 3.0 V. In the final design, I will use a microprocessor that can operate at 3 V to get the best accuracy, and to avoid a LOT of logic level conversions between the microprocessor and the 3 magnetometers. Another interesting characteristic of the Micromag3 is that you can calibrate all three axis with the official published magnetic field data for your location.

UPDATE :  the finished compass is described in this post.
Posted by Merlin at 9:01 PM No comments:

I propose here an exercise to assess the practical effects of 2 corrections described in previous posts:
We will see the results displayed by 3 types of instrumentation system, for a sailboat on a tack in the following conditions (assuming no upwash, and no wind shear). 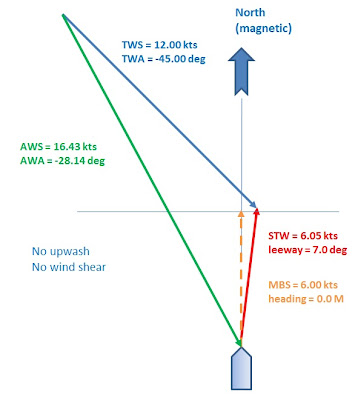 We see that the most volatile figure is the true wind angle (TWA), and by consequence the wind direction (WDIR). We also see that systems without correction make you believe that your boat is pointing like a champion. It is possible to retrieve the correct TWA by taking the average WDIR over the 2 tacks and back-calculating the TWA. This is called ‘dewiggling’ and the poor upwash is usually identified as the responsible, even if it has often nothing to do with that.
Posted by Merlin at 12:51 PM 17 comments:

In the previous post, I have presented a method to calibrate the leeway of a sailboat. Here, I present the details of the required calculations, in the form of a C-language routine. Beware that if you want to program this in Excel, the Excel ATAN2 function needs the arguments in reverse order : (x, y) instead of (y,x). 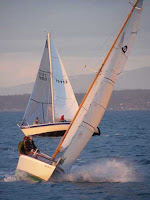 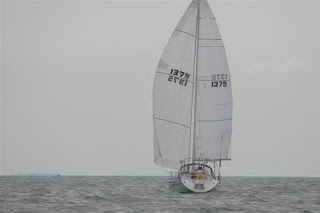 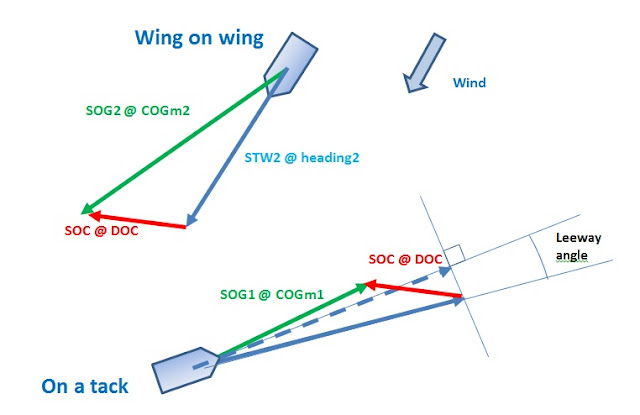 ﻿
During the first part of the test (tack) , it is important to note that the measured boat speed is NOT the real speed through water. The speed sensor is aligned with the boat centerline, and what it measures is the component of the real STW along the heading axis (the dashed arrow in the figure). In order to calculate the leeway, we will need first to calculate the direction of the real STW arrow (the solid blue arrow). It can be calculated by adding the SOG1/COGm1 green arrow with the negative SOC/DOC arrow. Once we have the direction of the STW, the leeway angle is simply the difference between it and the compass heading.  These calculations involve some non-trivial trigonometry, and I will present in a future post the exact equations for that.
I use the Airmar speed sensor model without the fins on each side of the paddlewheel. I consider that the fins are prone to bring local disturbances that are detrimental to the measurement accuracy.
Once we have the leeway angle from the test, we can calculate the constant K, using the boat speed and the heel angle from the first part of the test.
K = leeway  * speed2 / heel
Posted by Merlin at 3:15 PM 4 comments:

Corrections to the apparent wind angle

In a previous post, we have been able to calibrate the apparent wind angle (AWA) relative to the axis of the sensor itself. However, if the sensor axis is not aligned with the centerline of the boat (remember that we are seeking a resolution of 0.1 degree), we have to measure this offset. Here how it is done with this system.
We go on the water on a (nearly) windless day, and we keep motoring straight ahead against the wind (if there is some). During a period of say 30 seconds, we record the apparent wind angle. After that, we take the average (this is about 300 data points), and this is the offset that we will have to substract from now on:
awa_corrected_for_offset (awa_coff)  = awa_measured - offset
We also have the make a correction when the boat is heeling. Because the sensor is not on a 3-axis swivel, there is a purely geometric error induced when the AWA is not exactly a multiple of 90 degrees (0, 90, +-180, -90). For an explanation of the phenomenon and the required correction, see page 8 of the following document:
http://www.arvelgentry.com/techs/Sailboat_Performance_Testing_Techniques.pdf
So we have to apply this second correction:
awa_corrected_for_heel  = atan { tan(awa_coff) / cos(heel) }
The following figure presents the error in degrees at sailing points between 0 and 90 degrees, for different heel angles. If you are beating at 30 degrees AWA while heeling at 20 degrees, your displayed apparent AWA is 1.5 degree in error without this correction, which is not done in many (most?) commercial systems, with some nasty consequences on further calculations of true wind, wind direction and vmg. 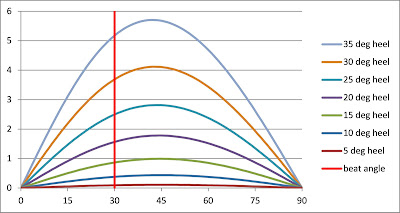 The SeaTalk repeaters are used as backup displays, useful when the notebook and/or the outdoor monitor are not available for some reason. For example, in low battery situation when the more power hungry monitor has to be shut off. I first tried a custom 7-segment LED display for this function, but it proved unreadable in the sun. I then decided to go with Raymarine ST40 repeaters for their easy-to-read displays in all conditions.

I found all the information I needed on Thomas Knauf’s website (www.thomasknauf.de/seatalk.htm). The SeaTalk protocol is peculiar in that it requires 9-bit ‘bytes’ instead of the usual 8-bit, which is why it cannot be interfaced directly with a PC. The ATmega microprocessor has built-in support for 9-bit communication. The SeaTalk protocol requires that you set the 9th bit to 1 for the first byte of a command, and reset it to 0 for the remaining bytes of the same command.
I built the bidirectional interface described on Thomas Knauf’s website, even if I use it only one-way. For the transistors, I picked a 2N3904 (NPN) and a 2N3906 (PNP).

﻿
With this post, I begin to present some code examples for the Atmega128, using the WinAVR environment (http://winavr.sourceforge.net/). The following example shows how to send 5 SeaTalk commands that the repeaters can recognize, using interrupt-driven communication for efficiency. The SeaTalk bus is connected to the USART1 of the microprocessor. The commands are first built in a byte array before being sent to USART1, configured at 4800 baud per the SeaTalk protocol.
/* Some inialization */
volatile char stbuff[21];
volatile uint8_t stindex = 0;
uint16_t data;

// enable the interrupt that fires when the USART1
// is ready to accept a new character to send
UCSR1B |= _BV(UDRIE1);

In this first picture, we can see the 2 microprocessor Chameleon enclosures (http://www.sparkfun.com/products/9682), along the notebook, the waterproof monitor, the gyrocompass, the small GPS at the center and one of the SeaTalk repeaters.The small black housing at the bottom is home for the SeaTalk interface circuit. By design, there are no buttons or switches on the enclosures, only connectors. The field installable round connectors are Conxall Mini-Con-X available at Digi-Key. 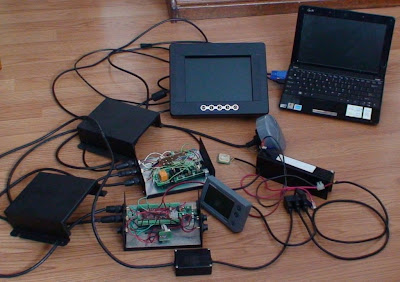 The next one is a close-up of the first enclosure, with the MAVRIC-IIB controller, the USB converter at the right and the 8 V regulator at the bottom. 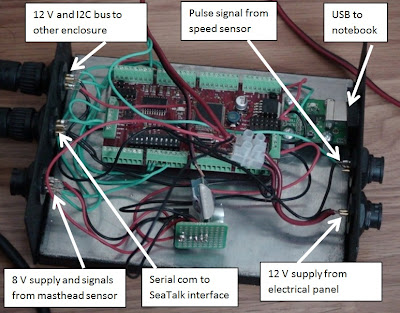 In the other enlosure, we can see the Olimex board, along 2 voltage regulators (5 V and 3.3V), and the small logic level converter between the two. 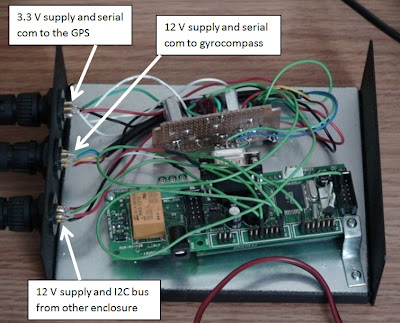 Posted by Merlin at 2:13 PM No comments: