In Part 1 of this post, I have presented the MagCal software that is used to calibrate a 3-axis magnetometer (or accelerometer).


One problem with MagCal is that one of the results (the matrix A) cannot be used directly. You have to calculate the inverse matrix A-1.  The other problem is that the matrix A elements have a limited number of significant digits, which affects the precision of the inverted result. And finally, the raw measurements numbers cannot be greater than 99.99, so that you may have to scale down all your data to use it.

I present here my alternate implementation called Magneto, which calculates directly the required matrix A-1.  It also presents the inverted A matrix to permit a comparison with MagCal results.

What are the differences between MagCal and Magneto?
Both find the equation of an ellipsoid that best fits the raw data points, using however different techniques. MagCal uses an “adaptive least square estimator”, and Magneto uses the “Li's ellipsoid specific fitting algorithm”. Which one is better? I don’t know, but the authors that have developed MagCal suggest in a recent paper that they may now use Li’s method.
Here is the output of both softwares, using the same raw data file provided with MagCal. 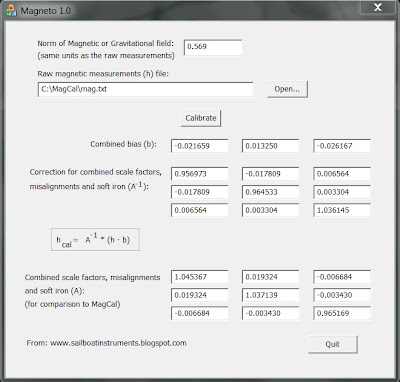 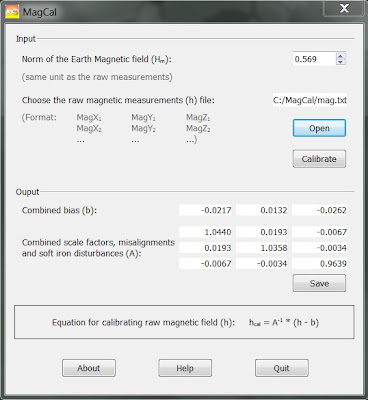 As you can see, the results are nearly identical. I plan to add new features and to fully document Magneto on its hosting site when time permits.
Posted by Merlin at 10:48 PM 19 comments: