A difficult decision to make when displaying measurement values is how much damping to apply. Too much damping and you will miss rapid changes in conditions. No damping and quickly changing digital displays become very difficult to interpret. One solution to this dilemma is to dampen all digital numbers, but to show both dampened and undampened values on analog displays. In this system, we use by default a running average over the last 4 seconds for damping. The running averages are recalculated each time a new value is received (10 times per second).
The following figures present around 19 seconds of data recorded during a beat (in an under-canvassed and badly trimmed boat, I must admit...). The dampened data is plotted in red over the real-time data.
Apparent wind angle (AWA)

True wind speed (TWS)
Custom software (written in C++) has been developed for the notebook to build displays using the real-time data received through the USB port. The only limit here is imagination. The following clip shows how the data presented above look like in the chosen display (the background image can be changed to any one of your preferred vendor or your own). The analog display shows both dampened and umdampened apparent wind angle (AWA), with the dampened true wind speed (TWS) number in the center. In the right column, we find the following dampened numbers: speed through water (STW), VMG, wind direction and heel angle. Two analog sliders also repeat the STW and VMG values.


This other clip shows a debugging display receiving most of the same real-time data, undampened.

Electronic compasses typically provide an auto-calibration feature that requires you to make wide circles on the water during the calibration process. The concept behind this is that your angular velocity will be constant during the turns. Well, in practical conditions with even light winds and almost flat water, the angular velocity is not constant. At some points, the effect of wind and/or small waves will impede the rate of turn, and later on will help to accelerate the rate of turn. The ideal conditions required for this type of auto-calibration are very seldom or never seen, and even if you think they are, you will never be sure of the results.  When these ideal conditions are not met, the auto-calibration routine will see false deviations that do not exist. There ought to be a better way.
After the auto-calibration routine reported success on the Airmar H2183 gyro compass, differences of more than 20 degrees with the regular compass were observed on some headings, while the 2 compasses agreed at dock where the compass offset was adjusted. It is clear that a supplementary deviation correction has to be applied.
Here is how it is done, after making several turns in the water while recording the heading value from the gyro compass and the COG value from the GPS. First, the COG values are converted from true to magnetic heading, using the current local variation value. Then, the diffence between the 2 magnetic values are plotted vs the gyro compass value.

A basic linear calibration is first programmed in the microcontroller. For boat speed, we can use the nominal specification of the Airmar transducer (4.8 Hz/knot). For the anemometer, a good starting point is 1.0 Hz/knot.
Then we go on a sea trial in which we make several slow turns by motoring at constant speed. We try to choose a calm sea with light winds and currents, but we cannot make the assumption of null current and wind, whatever we think or feel. In the general case, the boat drifts with the current as seen by the GPS. And the apparent wind speed depends both on the movement of the boat and any true wind speed over water.

During these tests, we record the following data: boat speed through water (STW), apparent wind speed (AWS), and speed over ground (SOG) from the GPS.
We will record a constant speed through water (STW) as we are motoring at constant speed. We will record a maximum SOG (SOGmax) as the boat goes in the same direction as the current, and a minimum SOG (SOGmin) as the boat is directly against the current. We will also record a maximum AWS (AWSmax) as the boat goes directly against the wind (AWS = boat speed + true wind speed) and a minimum AWS (AWSmin) when the boat goes with the wind (AWS = boat speed – true wind speed).
From these values, we can calculate the real speed through water:
STW_corrected = (SOGmin + SOGmax) / 2
The correction factor to apply to the boat speed is:
Boat_Speed_Correction_Factor = STW_corrected / STW
The correction to apply to the apparent wind speed is:
Wind_Speed_Correction_Factor = STW_corrected x 2 / (AWSmax + AWSmin)
This test also provides the following information:
Speed of Current during test = (SOGmax – SOGmin) / 2
True Wind Speed during test = (AWSmax – AWSmin) * Wind_Correction_Factor / 2
We can repeat the process for 3 different speeds, for example:  hull speed, 2/3 hull speed and 1/3 hull speed. We can then construct a calibration curve covering the whole range of boat speeds.
Similarly we can construct a calibration curve for the lower range of wind speeds. Cup anemometers are known to have a very linear calibration curve, so that we can safely extrapolate our curve for higher wind speeds.
Here is an example from a preliminary trial test done with the system (STW in blue, SOG in brown, AWS in green).

Two microcontrollers for the task

Accurate wind vane calibration is critical, as any small variation will significantly penalize the accuracy of many other results : apparent and true wind angle, VMG, wind direction, etc. By using the procedure described in this post, it is possible to achieve a typical resolution of 1/4 to 1/3 of degree.

The following figure illustrates the interface between the Raymarine transducer and the microcontroller. With a regulated 8.0 V supply, the wind vane produces 2 analog signals (the green and blue wires) varying typically between  2.9 and 5.3 volts. The exact range is influenced by the length of the cable going to the top of the mast. This is why it is necessary to calibrate only after the installation is complete on the boat. 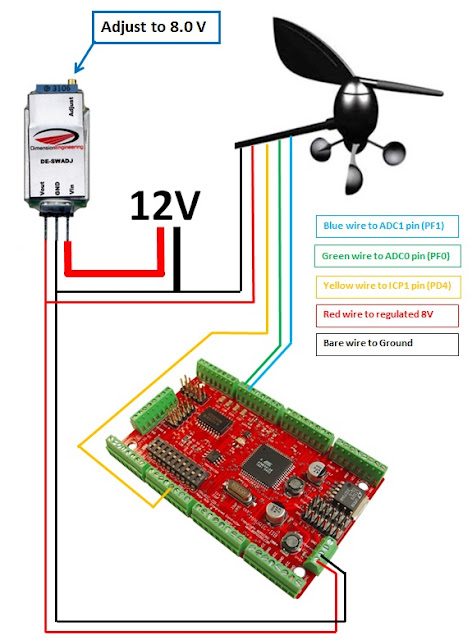 The analog signals can be fed directly to two ADC (analog-to-digital) pins of the microcontroller, as the input pins can tolerate up to 5.5 V. The microcontroller uses a 5 V volt reference to convert the signals to a number ranging from 0 to 1023. All voltages higher than 5 V are reported as 1023.

This is the form of the signals produced when the vane is rotated through a complete turn from 0 (wind from the front of the boat) to 360 degrees, clockwise from above. 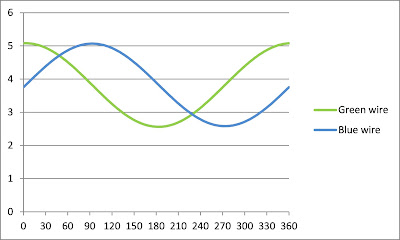 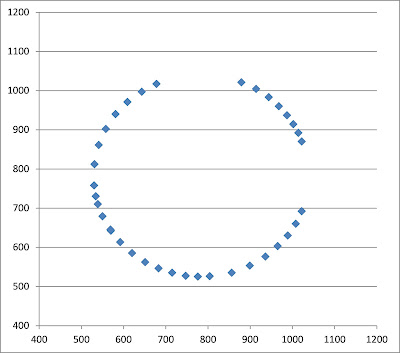 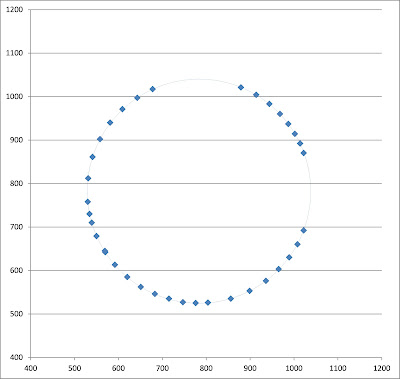 We can also now reconstruct the green and blue signals from the equation results. We already know that the vane is pointing forward (AWA = 0) when the green signal is at or very near its maximum value. There is a (approximately) 90 degrees offset between the zero angle of the equations and the zero AWA. We will now apply a preliminary offset of 90 degrees to the results of the equation so that we can graph the curves with respect to this nominal AWA. Even if this offset is not exactly 90 degrees, the remaining small adjustment will be merged in the final offset adjustment that we will have to make to correct the alignment of the transducer with the centerline of the boat. 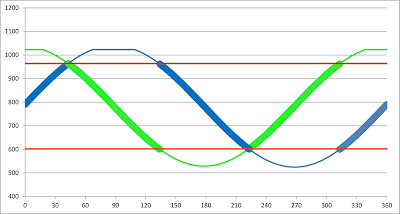 We use only the thick lines for calibration, where the values are between the intersection points of 964 and 602. When the green value is outside the red zone, we use the blue curve, otherwise we use the green curve. When we have determined the color of the curve to use, there are 2 possible angles for the same value, which we can separate by noting if the blue value is greater or lesser than the green value.
For efficiency, we precalculate the angle for each thick line value inside the red zone, so that the green (or blue) value defines an index in a lookup table. The lookup tables are stored in the flash memory of the microprocessor.

This is a lot of work but it has to be done only once and we are rewarded by a resolution varying from 0.23 to 0.32 of a degree, depending on the angle.

UPDATE :  I am now using a simpler method to calibrate the wind vane. See also here for the related microcontroller code.
Posted by Merlin at 9:53 AM 1 comment: